Sandfly has the ability to actively respond to detected threats. The current version supports killing or suspending process activity that a user wants targeted. 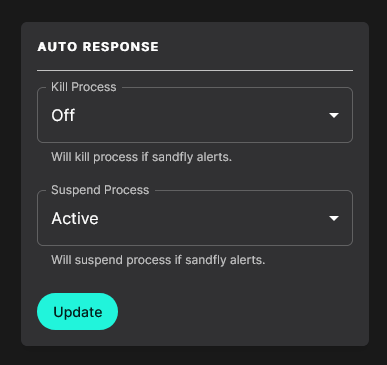 Sandfly has two methods to deal with detected process attacks, suspend or kill.

Often people think the best thing to do when a compromise happens is to kill the process. However, this can cause a lot of lost information and actually hurt proper incident response. Because of this, Sandfly can simply suspend a process it flags as suspicious.

Suspending a process has advantages over simply killing something that looks suspicious. These are:

In general, unless you are sure the process needs to be killed we recommend you suspend it so it can be investigated. Once you see what is going on you can isolate the system and take further actions.

When you set Sandfly to kill a suspicious process we will terminate the process immediately on the host. While this will stop the process in question, it may also cause any forensic data it has in memory to be immediately lost.

In general, we do not recommend that you kill any suspicious process until it has been investigated and evidence preserved. If you are sure the process is something you do not want to deal with, then killing it may still be a good option.